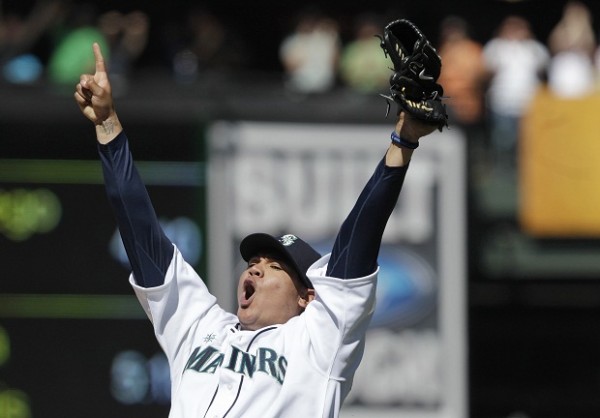 
After 11 weeks of broadcasting summer collegiate baseball, overlapped at the end by exhaustive (and exhausting) hours of Olympic coverage, I can now turn my free time attention back to baseball. It looks like I got back just in time, too. This has been quite a week. Just a dozen random notes and observations...


I was watching the Giants-Nationals game Wednesday afternoon (Lincecum vs. Strasburg) when I learned that Seattle's Felix Hernandez was working on a perfect game. When Hernandez got to the ninth inning, I flipped over to ESPN, just in case they broke in to show it. They did, and I got to see the last out. It was just the 23rd perfect game in Major League history, but already the third this season (Philip Humber, Matt Cain). I don't think that lessens the accomplishment. In fact, if you are a believer in the law of averages, we may not see another one for a very long time.

For the first ten years of their existence, the Tampa Bay Devil Rays were pretty much the laughing stock of the American League. They exorcised the “Devil” from their name in 2009, and got good. So how is it that a perfect game has been thrown against them three times in four years (Mark Buehrle in '09, Dallas Braden in 2010, and Hernandez this week)?

From a friend of mine who is just a casual baseball fan at best: “How come only in baseball would you use the term 'perfect game' to describe that nothing happened?”

Other than King Felix' perfect game, what better way to get back into the baseball groove than with the Yanks and the Sox. Even Fox took two weeks off from its Saturday game of the week (I'm guessing because of the Olympics, even though they were on another network), but returned with the latest chapter between the familiar foes from New York and Boston. Saturday, the Red Sox trailed the Yankees by 13˝ games in the standings, prompting Fox analyst Tim McCarver to say “If the Red Sox were a stock they'd be Facebook.”

ESPN had the Sunday telecast from Yankee Stadium. Not only are the Red Sox way behind the Yankees, but there has been a lot of turmoil about new manager Bobby Valentine, and now questions about if left fielder Carl Crawford needs season-ending surgery. All of that led ESPN analyst (and former Red Sox manager) Terry Francona to say “There's been so many things coming out of that clubhouse. It wouldn't surprise me if we see Manny Ramirez come out and pinch hit.”

So it turns out that San Francisco's Melk is tainted. Melky Cabrera has been suspended 50 games for testing positive for a banned substance. Cabrera was leading the National League in hits, and had become a cult hero among Giants fans, much like Pablo Sandoval. You even had the “Melk Men” and “Melk Maids” in the stands, joining all the people with panda hats. Too bad, and shame on you, Melky.

Speaking of the Giants, TV analyst Mike Krukow missed the home series with Washington this week, with play-by-play partner Duane Kuiper explaining that Krukow was “on assignment”. I've come to learn over the past few years that that term is used as a joke, but someone actually wrote in and asked what that meant, and the question was used on the air. Kuiper kind of fumbled through an excuse, but it just means that Krukow was taking some time off—probably home in San Luis Obispo playing with the grandkids.

This was a big weekend for the Oakland A's. Not only because they swept three games from the Cleveland Indians, but because they were celebrating the 20th anniversary of their American League-record 20-game winning streak. The weekend featured Scott Hatteberg Bobblehead Day, fireworks, and a screening of the movie Moneyball on the field. Hatteberg, 2002 manager Art Howe, and other former players were there. Brad Pitt was not.

I'm not a huge fan of putting 12 year-olds on TV in a super competitive atmosphere, but the Little League World Series can provide some drama, and I'm sure is a big deal in Sonoma County right now, where the kids from Petaluma have made it to Williamsport. Both the Giants and A's have donated money so that the kids and their parents could make the trip. Kind of a cool story. The other nice thing about the LLWS is it forces ESPN to televise a Monday or Wednesday night MLB game from the west coast. Tonight it's the Giants at the Dodgers, but the telecast will be blacked out in most of California anyway.

You've got to hand it to the new Dodgers ownership. They did go out and make several deals at the July 31 trading deadline—bringing in Hanley Ramirez, Shane Victorino, and Joe Blanton. As much as I was a fan of James Loney, the Dodgers biggest weakness is still at first base, but management will unlikely be able to address that until after the season. They had a deal in place for Houston first baseman and apparent part-time cattle rancher Carlos Lee, but Lee declined a deal, and was later shipped to Miami instead. I didn't realize South Florida was such a cowboy haven. Incidentally, the Marlins are at the Dodgers this weekend. Maybe a few boos for Lee are in order?

I feel sorry for Houston Astros fans. Not only has their team been coerced and extorted by Commissioner Bud Selig to move to the American League next season after 50 years in the NL, but all of the organization's players of any value (Lee, Lance Berkman, Michael Bourn, and Wandy Rodriguez to name a few) have been moved, and shockingly the team is on pace to lose over 100 games. All of that somehow has become the manager's fault. Brad Mills was fired this week.

The first big beneficiary of the expanded playoffs could be the Pittsburgh Pirates. It looks like they will have their first winning season since 1992, and based on the standings right now, they would qualify as the second wild card from the National League. If that's where they end up, expect a large contingent from western Pennsylvania at the next “We Love Bud Selig” convention (I can't make it).

As I finished this stupid column, and put the date on it, I realized what today is. It was 10 years ago today that my cousin Korey lost her husband Steve. In one way, it doesn't seem that long, but in another way it seems like a very long time. His three daughters are all grown up, and I know Steve would be very proud of them all. We miss you, Steve Dudley!