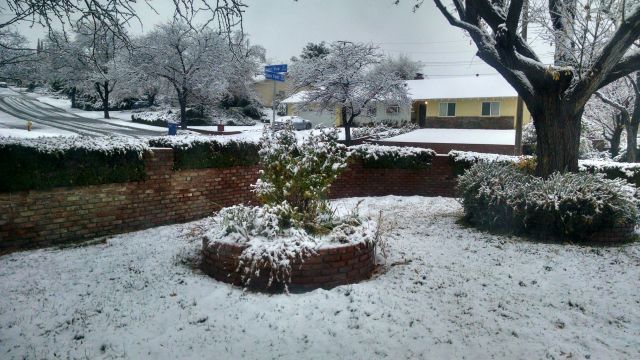 
Let's face it. All of my adult life, Christmas has been more than just a little awkward. Most people my age have spouses and kids, and maybe even grandchildren. I've never married, no children, let alone grandchildren, and to go with that, I'm an only child. No complaints, just the facts. My dad died when I was 17, so Christmas was always just me and my mother. This is my first one without her.

Thanksgiving was the time to see the uncle and aunt and all the cousins. Christmas was just the two of us. Mom would decorate the house and cook a nice dinner—I think mostly for my benefit, even though she enjoyed it. I would always make sure I would be there and soak up the atmosphere with the tree and the lights, even though it wasn't really all that important to me. I'm not suggesting that the whole thing was a charade, but it always seemed to feel a little forced. Turns out, I miss that kind of holiday.

The gift giving was a little strange, too. I truly never really wanted anything big, and would get clothes, underwear, socks, a sports almanac, and some money. With all of that, I couldn't get Mom just one thing, so I almost always would get her something electronic that she could use but didn't (DVD player, computer, DVR, etc.), a CD (she would usually request one), something Dodgers related, a gift card, and a pet-related item. It was the same thing every year, and although it would often seem ridiculous to me, it was our thing. It's an even stranger thought that I would miss getting underwear for Christmas!

I still haven't done anything with mom's house, so I spent the holiday there this year. Part of the usual Christmas was seeing my neighbors and friends, the Keigwins, on the 26th. They graciously invited me to dinner this year, which was nice. I spent December 25 by myself, which was fine. I went to the cemetery in the early afternoon, and then planned to go to a movie, but decided instead to go out for a late lunch/early dinner, and then go back to the house.

The next day, I went up the street to the Keigwins. Mrs. Keigwin lost her daughter Kelly in July to cancer. Kevin and his wife Rosa and their two children, who all live in Ventura, turned out to be sick and didn't make the trip over. Tom, the oldest, his wife Linda and their daughter Elena, and Kelly's wife Sam, all from the Portland area, were there. We had a nice meal, and talked a lot and caught up. It was a nice day.

On top of that, some time before dawn, it started to snow. Palmdale and the Antelope Valley ended up with several inches in 24 hours, and really made the area look beautiful. Linda was flying back to Portland the next day, but made her flight. After literally having to dig the snow off of my car, which had hardened after two days, I drove back Saturday morning, and apparently, the Grapevine had just re-opened after being closed during the night due to ice. I was actually planning on leaving an hour earlier. So glad I didn't.

But with Christmas alone on the 25th and a trip to the cemetery, and dinner on the 26th, the real reason for the entire trip was December 27. I had no idea what the plans were, but with the Keigwin family, there was supposed to be some sort of memorial for Kelly. She passed away in July, and there was an informal gathering in the Portland area, which I attended, but there was to be something in her home town after Christmas. It turned out to be a dinner at her favorite restaurant, organized by one of her friends. There were only ten of us, half of which were the dinner party the night before. Being joined by five of Kelly's friends, just sitting around, talking, drinking margaritas, and looking at pictures turned out to be very pleasant.

Given all the circumstances, it was a lousy Christmas, but there was a calmness about it. I spent Christmas Day with my mom (sort of) the way I usually did, spent the day after with the Keigwins (minus the Ventura clan), and then got to remember Kelly on the 27th. And, of course, snow!

This Christmas could have been worse, and I'd like to thank all of the people that included me in their plans this year. I now know that it will never happen again, but the usual, somewhat forced and awkward Christmas seems like a pretty good thing now.


Happy New Year!: I'll write more about it next week, but 2020 can't get here fast enough. I lost my mother, Kelly, my neighbor Mr. Hickert, and my cousin Cameron Boyce, who was just 20, all this year. It seems like so many other people I know experienced more loss in one year than anyone should. Stay safe Tuesday night, and may the 2020s be twice as good to you as the 2010s.


Photo: Taken from by bedroom, looking up the street. The Keigwin's house is to the left of the yellow house, mostly blocked by the tree.