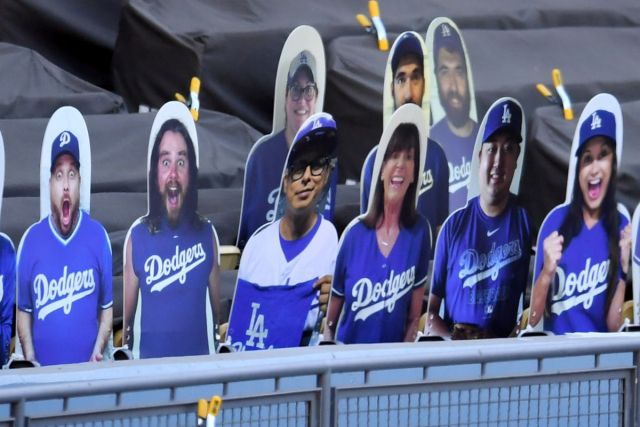 
Cardboard cutouts in the stands, cheers from fake crowds coming over the public address system, announcers not even at the game, and even computer-generated fans for nationwide telecasts. It is real baseball, though, and it all got underway over the weekend in a season they hope to complete in just 67 days. But, just as the fun and games got started, and all there was really to quibble about were rule changes, reality has set in.

It was fitting that Dr. Anthony Fauci threw out the ceremonial first pitch in our nation's capital Thursday night. It's also appropriate that the softly-thrown ball thrown by the 79 year-old authority on infectious diseases missed its mark. Then, what could certainly be interpreted as an omen—the game that night between the Washington Nationals and New York Yankees was shortened. At least it was rain that curtailed the game to five innings, and not the coronavirus.

If the dozen nationally televised games in four days were a nice break from everyday life, Covid-19 has reared its ugly head again, Several Miami Marlins players have tested positive for the coronavirus. The number has varied according to different reports, but ESPN's Jeff Passan broke the story this morning that 12 players and two coaches tested positive following their weekend series in Philadelphia. The Marlins home opener was postponed, and the Phillies' scheduled game against the Yankees was also called off, out of fears that Phillies players might also have been infected, and the clubhouse, used by the Marlins, could be contaminated an possibly endanger the Yankees if the game was played. The Marlins are under quarantine in Philadelphia, and will not play their scheduled Tuesday night game in Miami, either.

While baseball hopes this situation will sort itself out, the rest of the sports world is watching. The NFL insists their training camps will open on time. NBA players are supposed to be in a “bubble” in Orlando, but Lou Williams of the Clippers, got permission to leave, and was photographed at a night club. Two Major League Soccer teams had to withdraw from the 'MLS is Back' Tournament in Florida because of too many positive tests, and college football conferences, one by one, are delaying or canceling fall sports. High school football in California will start in January at the earliest.

Before the report on the Marlins Covid cases, baseball's biggest problem was Canada. The Canadian government would not allow the Blue Jays to play in Toronto because of visiting teams traveling in and out of the country. An exemption of the quarantine law was asked for and denied, forcing the Blue Jays to play most of their “home” games in Buffalo, the site of their Triple-A minor league team. The Canadian government got a lot of criticism on the American side, but it now appears to be the right move. The National Hockey League is about to re-start in two Canadian cities (Edmonton and Toronto), but with much more stringent rules than the NBA has in Orlando. It should be noted that other countries are doing better than the United States when it comes to flattening the Covid curve. So much so, that South Korea is starting to allow fans in their ball parks after being the first nation on the planet to resume sports, even in empty venues.

A 60-game baseball season, from an historical perspective, would be a joke, but (am I'm just coming around to this point of view) at least it's something. Whoever wins the World Series, assuming we have one, will have earned it. Years from now, it might even be looked upon as extraordinary, given the conditions of the day, and the trials and tribulations that teams had to endure. In order for there to be a World Series, and a champion, some of the precautions that are being taken have to be taken more seriously, with perhaps more protocols added.

Many players, mostly pitchers, who aren't directly involved in the game are sitting in the stands instead of in the dugout. That's great, but they've often been seen sitting together. The high-fives and hand-slapping after a home run or victory are supposed to be prohibited, but you still see it. Some players are into wearing masks while they are playing, and some aren't. You can also start to understand why some players opted not to play this season.

The season that has been repeatedly billed as a spring instead of a marathon is now in danger of being called a false start. Yes, the schedule is too short, the universal DH is a shame, and the runner at second to start the tenth inning is stupid, but at least it's here. It is what it is, but it is baseball. The season is underway. Let's just hope there's a conclusion.


Expanded playoffs: Congratulations to the Los Angeles Dodgers, the New York Yankees, and a couple of other teams for making the playoffs before the season even started. Before the news about the Marlins this morning, this was going to be a column about baseball deciding at literally the last minute (about an hour before the first game on Thursday) to expand the number of playoff teams from 10 to 16. Every broadcast you heard over the weekend praised the idea, but heaven knows why. Now, the top two teams in each division qualify for the post-season, plus the two next-best teams in each league. Do you think the Dodgers or Yankees will really finish third? The first round will be a best-of-three, meaning a team with a losing record and two hot pitchers could knock out a division winner, and possibly win the World Series. It's nor only stupid, it's a money grab, and it makes what was supposed to be this exciting short season even more worthless.

More weirdness: Things about the 'new normal' include some announcers not at games, and the ones who are there are not allowed on the field. Local radio broadcasters pretty much have the run of the place, although Joe Davis and Orel Hershiser looked a little too cozy in the Dodgers TV booth.. For the first time in 66 years (1954), no team has started 3-0.

Fan-tastic: Some ball parks are using cardboard cutouts in the stands and some aren't. It's kinda dumb, but in most cases, the money raised goes to charity. The Texas Rangers are calling the cutouts Ranger-gangers (like dopplegangers), and are only charging 59 dollars. The Giants are charging 99 bucks. Photos of pets, even from major league players, are also be used.

Favorite stat: From ESPN on Sunday during Giants-Dodgers game. Alex Rodriguez' career batting average at Dodger Stadium is .192 (10-for-52)—his worst average at any ball park. Now if we can only get that steroid cheat off the air.