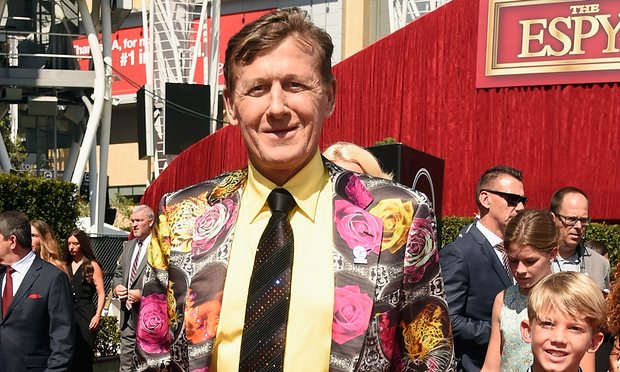 
If you look at this space from time to time (and thank you if you do), you'll find this column is almost always about sports. When it's not, it probably has something to do with an awards show. So what should be better than a sports awards show, right? Well if you want a three-hour downer, then the ESPYs are for you.

That's not necessarily a bad thing, but it's tough to sit down and devote an entire evening to sad stories. They are inspirational, and they can be heartwarming as well as heartbreaking, but not exactly a sporting event type atmosphere. Wednesday's broadcast opened with a political statement from four prominent athletes of color—Carmelo Anthony, LeBron James, Chris Paul, and Dwyane Wade. They condemned recent shootings in places like Dallas and Chicago, and also called for athletes to be more active. Not a bad sentiment, but not exactly the icebreaker we thought we would get.

How about a wrestler for a host? John Cena isn't exactly Billy Crystal or Ricky Gervais, but he did get in a couple of good one-liners, and also fulfilled his promise of the late Jimmy Valvano's idea of a good day—you'll think, you'll laugh, and you'll cry. “Tonight, we are going to do all three”, Cena said.

The features are typical of the ones that pull the heartstrings, but as is the case in sports, each is unique. A Paralympic swimmer, Sergeant Elizabeth Marks, was given the Pat Tillman Service Award. She is still active duty, suffered debilitating hip injuries while a combat medic in Iraq, and then a respiratory infection, but still swims. She said she didn't even know what the ESPYs were.

The Comeback Athlete of the Year didn't go to a guy who came back from injury. Eric Berry of the Kansas City Chiefs came back from cancer. Videotape of highlights followed with a couple of tackles, an interception, and his mother crying.

Unfortunately, the best story was more of a social commentary than an athletic one, but it still packed a severe punch to the gut. The Arthur Ashe Award for Courage—the one presented to Jimmy Valvano at the first ESPY awards, was presented posthumously to a 15 year-old high school football player from a bad Knoxville, Tennessee neighborhood. Zaevion Dobson was killed when gunfire erupted while on his way home from a basketball game. He threw himself on top of two friends—sparing their lives. A mini-documentary told his tale, and his mom and family accepted the award on stage.

Then, the event you knew was coming. A sportscaster with a loud wardrobe and a terminal disease getting the Jimmy V Award for Perseverance. Craig Sager, of Turner Sports, who also got to work his first NBA Finals this year courtesy of ESPN, was introduced by Vice President Joe Biden, who recently lost his son to cancer. Sager, following the words of the late Valvano, said “I will not give up, and I will not give in. I will continue to keep fighting—sucking the marrow out of life as life sucks the marrow out of me.” Powerful stuff, but not exactly the feel-good hit of the summer. Add the 'In Memoriam' segment and a show-closing tribute to Mohammed Ali, and you have one tough night.

As for the awards, who really cares? There were some, but they were for things like 'Best Team'. It's like apples and oranges. The Cleveland Cavaliers, Denver Broncos, or the Kasnsas City Royals? Cleveland won of course, because it was the city's first championship in over four decades. Most of the awards, like 'Best Driver' weren't even shown.

You got to see Peyton Manning in a powder-blue jacket with no tie, Ciara (now married to Seattle Seahawks quarterback Russell Wilson) in a dress that you aren't sure how it stayed on, and all the usual fun and glamor that comes with an awards show, but at an emotional roller coaster of a price. If the Kentucky Derby is the fastest two minutes of sports, the ESPYs are the toughest three hours.


Deadest night in sports: It used to be that the day before and the day after the All-Star game were the worst days in sports. Nothing was scheduled. The Home Run Derby (which was awesome by the way) is on Monday and has taken on a life of its own, and the ESPYs and Triple-A All-Star game are on Wednesday. The major leagues don't resume until Friday now, making Thursday completely empty. Well, except for maybe a soccer game or something.

Yawner: Baseball executives, and network bigshots, need to admit that they think baseball is boring. In a non-memorable All-Star game Tuesday night, not only did they pause for God Bless America during the seventh inning stretch, but there was even a live performance after the fifth. Baseball isn't boring, but All-Star games are becoming that way. The American League won 4-2, and Kansas City's Eric Hosmer with a solo home run and a single, was the MVP.

Home field advantage: The American League won again, and with it they get home field advantage in the World Series. It's one thing that the AL has won 14 of 16 since the All-Star games “count”, but they were even the home team in a National League park! So what if the NL seems to have better fields (The All-Star game was in Cincinnati last year, San Diego this year, and Miami next year), make the home league the home team.

What happened?: After play on June 22, the Marysville Gold Sox were 15-2 (.882) and had a 4˝ game lead in the Great West League. Since then, and with a loss tonight, they are 7-14 (.333) and now trail by 4˝ games. They are still in second place, though. The Gold Sox also did not commit an error tonight—ending a franchise record-tying streak of 21 consecutive games with a miscue.