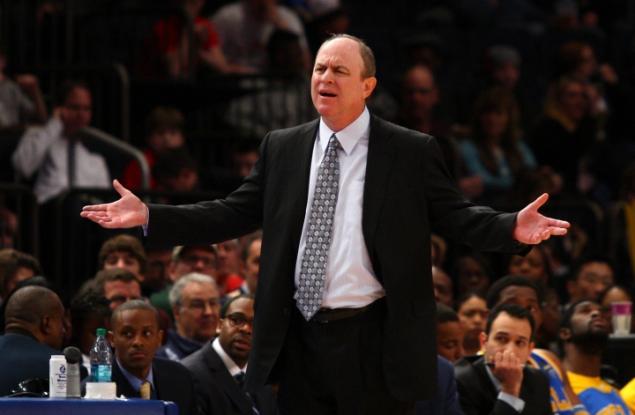 
They won the Pac-12 regular season title. They defeated nemesis Arizona three times. They qualified for the NCAA Tournament. But they also lost to Washington State, USC, and Cal Poly, and were clobbered by Minnesota in the Tourney's first round. After ten years, and at one time three straight Final Fours, UCLA has fired its basketball coach.

Ben Howland won 68˝ percent of his games at UCLA (233-107), won four conference titles, and had the three straight Final Four appearances from 2006-08. He was the longest tenured coach at the school since John Wooden retired in 1975. College coaches, though, also have to recruit, and it seems that was the underlying problem.

Howland has gotten good players, but not without issues. Freshman Shabazz Mohammed, who undoubtedly will be in the NBA next year and didn't play as well as advertised, broke NCAA rules involving recruiting visits to other schools. That wasn't Howland's fault. Another player was investigated for recruiting violations, but cleared. Some players quit, others have been dismissed. It hasn't exactly been a love fest at Pauley Pavillion.

It's still hard to say if Howland deserved to be fired. I'm sure if a young, successful coach (Shaka Smart of VCU? Brad Stevens of Butler?) was hired, Westwood would forget about Howland in a minute. UCLA Athletic Dan Guerrero would not name any potential candidates, but you have to think whoever lands the job will be someone we've heard of. As for Howland, don't cry too much. If the 56 year-old doesn't coach, he'll reportedly make 2.3 million dollars next year. You also have to think he'll be high on lists of other schools looking for coaches. USC maybe? The Trojans have an opening. Wouldn't that be something. Maybe it is time for a change, but change isn't always a good thing. As the 1980s group Asia sang, only time will tell.


Go figure: Minnesota, which pummeled UCLA by 20 points Thursday but lost Saturday to Florida, fired their coach today. The Golden Gophers were 124-81 in six seasons under Tubby Smith.

Gone-zaga: When the Gozaga Bulldogs just barely beat 16-seed Southern in their tourney opener, Yahoo! Sports declared them a fraud. Pretty harsh words for a team that was ranked number one in the country by the Associated Press, but had just barely gotten a top seed by the NCAA Tournament selection committee. The 'fraud' declaration was an outrage. Gonzaga was 38-2, and went unbeaten in their conference. What else could you want? Two days later, the Zagnuts were ousted by the Wichita State Shockers—a team that more than lived up to their nickname. It's hard to make a case for Gonzaga now.

Bracketravesty: Like just about everyone, my brackets are a total nightmare. I picked the Zags to win it all, but my other three Final Four teams (Louisville, Miami, Michigan) are still alive. The East Region isn't perfect, but all four of the top seeds (Indiana, Miami, Marquette, Syracuse) are still there. Oregon should have been seeded much better than 12, and they proved it with wins over fifth-seed Oklahoma State and number-four Saint Louis. Oregon joins top three seeds Louisville, Duke, and Michigan State in the Midwest. The South doesn't look too bad, unless you consider that 15th seed Florida-Gulf Coast becomes the first team with that high a number next to its name to get this far. Top seed Kansas, number three Florida, and fourth-seed Michigan remain in that group. The West is the region that has completely fallen apart. The four that have survived are second-seed Ohio State, number six Arizona, ninth-seed Wichita State, and 13th seed LaSalle. For all the new Florida-Gulf Coast fans, they play big daddy Florida on Friday.

A smooth transition: To bridge from basketball to baseball, how about this? University of Miami guard Shane Larkin is the son of baseball Hall-of-Famer Barry Larkin. Shane's Hurricanes are on to the Sweet Sixteen. Barry was broadcasting the Red Sox-Orioles game for ESPN this morning.

Baseball bits: Even with the Madness, this was more of a baseball weekend for me. Two fantasy drafts (I'm happy with both my teams, but like real baseball, everyone's optimistic for Opening Day, right?), and several games on TV and radio. Since ESPN is only televising spring games from Florida, and the Dodgers haven't been in Vero Beach for years, the Guggenheim Guys made their only northern California spring television appearance Sunday, losing to the Oakland A's. Carl Crawford and Andre Ethier hit home runs, but Cuban phenom Yusiel Puig, who was something like 10-for-11, went 0-for-2. The Cubs faced the Angels on WGN Saturday, with a new announcer in their booth. Former pitcher Jim Deshaies, who spent most of his big league career with Houston, replaces Bob Brenly. Deshaies was a broadcaster for the Astros the last few seasons. Brenly will be doing Arizona Diamondbacks games.

Perfect streak to end?: Since professional baseball arrived in Marysville in 2000, local radio station KUBA (1600 AM) has broadcast every game. But that streak could be coming to an end. The radio station plans on only airing 35 of the 49 scheduled Gold Sox games this season—all Friday, Saturday, and Sunday night games, plus Opening Night Thursday May 23, and the game on Independence Day Thursday July 4. All other Thursday games, all three road games, and a couple of extra home games (Wednesday July 3 and Tuesday July 30) are not scheduled to be broadcast. KUBA management says that could change, but the station would need more advertisers. Counting the Feather River Mudcats of 2000, the Pro Gold Sox of 2002, and the collegiate Gold Sox of 2003 to present, KUBA has aired 666 straight games.

I just found out: I am saddened to learn of the passing of Clyde Perry. Mr. Perry was a big Gold Sox fan, and I always liked being around him. I just found out this weekend, but he passed away in November. Perry was a local baseball legend, and in his day, earned the nickname “Slidin' Clyde”. He was born in Marysville, went to Sutter High School and Yuba College, and played in over a thousand minor league games from 1948 to 1958. He started with the Class-D Midland Indians of the Longhorn League, but spent most of his career with the Dallas Eagles of the Double-A Texas League. If you took the time to listen (and I hate to admit I didn't always), he had plenty of stories to tell. He liked to watch batting practice, even if he had to sneak in to do it. I would aid and abet him sometimes by making sure he had some cold water to drink on a hot day. He even wrote nice things about me and the Gold Sox broadcasts in letters to the newspaper. He will be missed. Clyde William Perry was 85.