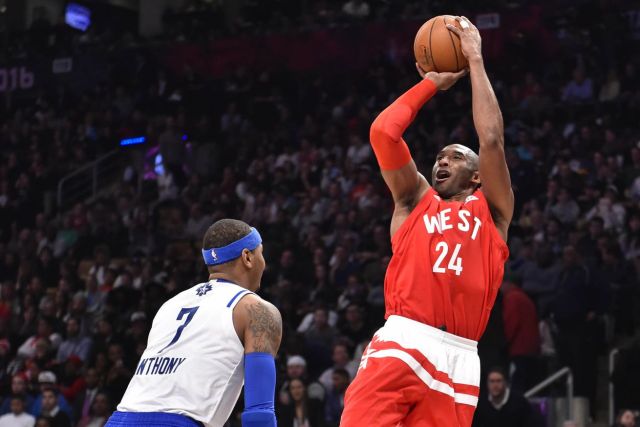 
I haven't watched professional basketball for a year and half. I've also been inexplicably and unjustifiably proud of that streak. I wasn't planning on ending it anytime soon, either, until I realized, and just in time for this weekend, that there's a game coming up I have to see. Kobe Bryant will be ending his 20-year career in April, and a prelude to that occasion played out last night. His final All-Star game.

Now if you are going to not watch NBA basketball, you certainly wouldn't be interested in an All-Star game that's nothing more than a ragtag exhibition. In the first quarter, guys were running up and down the floor, throwing the ball intentionally off the backboard so a teammate could rebound it and dunk it. It's fun, but it's not really basketball, but the sports public has come to understand that, so, in the words of the late Chick Hearn, no harm no foul.

The West beat the East 196-173, which certainly says this wasn't basketball. Last night was not about basketball, though, it was about a basketball player, and the career of Kobe Bryant. I couldn't help but think about my cousin Payton and early-twenty-somethings like him who don't remember a time before Kobe, and grew up loving and playing basketball because of him.

We'll save all of Kobe's life and times for that last game in a couple of months, but it isn't often that a player gets a sendoff from the fans and his peers like Kobe got last night. Magic Johnson had already retired when he came back in 1992 for an All-Star appearance. After the world was convinced that HIV was not contagious, but also thought Johnson only had a few years to live, Magic had 25 points on 9 of 12 shooting, and won the MVP.

Kobe's night was nothing like that. He had an un-Kobe like 10 points on 4-for-11 shooting and 1-of-5 three pointers. He also tallied 6 rebounds and 7 assists. But midway through the fourth quarter, he was taken out of the game to a standing ovation and chats of Ko-be Ko-be! He was honored by his fellow players to start the night, and thanked the audience for voting him into the game. Kobe is 37 now, and was playing in the NBA when he was 17. This was his 18th All-Star game, and his last.

Very few will remember that Russell Westbrook (with 31 points and 7 three-pointers) was the MVP, or that Paul George (who is from Palmdale by the way) scored 41—one point shy of Wilt Chamberlain's All-Star record. The night was for Kobe, as his career winds down.

I think it's fair to say that an All-Star game doesn't really count as a real game, so my not watching the NBA streak still continues (although perhaps with an asterisk). But if not before, it will end on April 13 when the Lakers host the Utah Jazz and Kobe calls it a career for good. That's my mom's 90th birthday so I'll have to tape it, but I'll be watching. Kobe was too good for too long not to want to be there when it comes to a close.


World's Stupidest Athlete: If you think baseball's steroid era is over, think again. Mets relief pitcher Jenrry Mejia became the first player banned for life because of performance-enhancing drugs, after three (yes three) failed drug tests. Crazier, Mejia failed the second and third drug tests while he was on suspension for the first one. Even crazier still, while on that first suspension, the Mets actually offered him a contract! Major league teams offering top dollar to prove cheaters (Melky Cabrera, Nelson Cruz, Ryan Braun, etc.) is another topic entirely, but Mejia was the Mets closer last year, and was going to be given another opportunity to close this season after his original suspension, and yet he still chose to cheat twice more. See 'ya Mejia.

Phil-ustered: I know Phil Mickelson has 42 titles on the PGA Tour to his credit, but doesn't it seem like he always blows it down the stretch when you are rooting for him? The lefty just missed a five-foot birdie putt on the 18th hole that would have forced a playoff. He still had a great run, but Vaughn Taylor was lights out on Sunday to win it.

It's actually live: CBS threw me a curve this year, actually televising the Grammy Awards live in the Pacific time zone. In the past, the show had been tape delayed, and I had planned to watch it when I got home from work. When I turned on the television when I did get home, it was halfway through. The network is reshowing it after the live broadcast (much like NBC does with the Golden Globes) but, pausing to write this, I'll probably just catch highlights.

Political Point: I'm no constitutional scholar here, but I don't think the forefathers ever designed the Supreme Court to be political. Hopefully, the death of justice Antonin Scalia will bring this out into the open. Republicans want Roe v. Wade overturned, while Democrats want Citizens United thrown out. The decisions have been made, and like it or not, it's by the Supreme Law of the Land. You have to move on. Marco Rubio pointed out that a lifetime appointment for a justice wasn't as long then as it is now because life expectancy was much shorter then. That may be true, but the fledgling U.S. government didn't have political parties then, either. To paraphrase Bernie Sanders, it's another example of a broken system. Justices should be chosen on fairness in hearing cases and the knowledge of the law and the Constitution, not on their views about abortion or campaign finance reform.