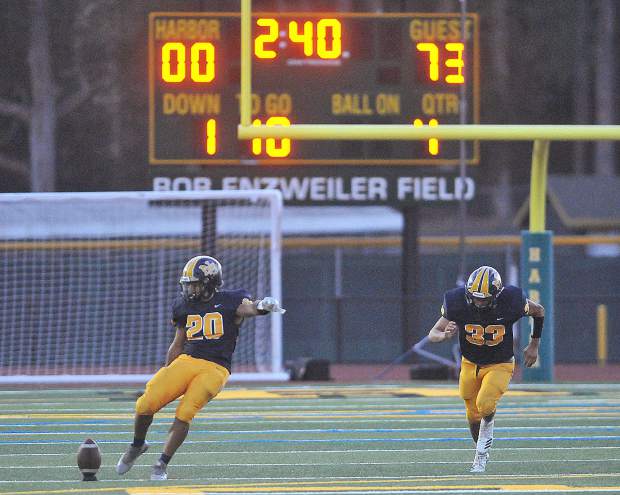 
Nevada Union is a legendary football school. That is, if you are familiar with the area and old enough to remember. The high school in tiny Grass Valley used to win section championships in the 1980s and 90s, and were even quite formidable in the early 2000s. But even in those days when they were clashing with behemoths fron Sacramento and beyond, never did they win 73-0.

Due to declining enrollment, and the emergence of large Sacramento suburbs, the Miners have gone from powerhouse to mediocre at best. They have not won a league game in more than six seasons, even after finally being moved to a league of smaller schools last season. They got beat up by guys like Jake Browning and Ian Book, who went on to the University of Washington and Notre Dame, respectively. Running clocks were the norm, and N-U was on the losing end.

Now, at least for one night, for one brief shining moment, the tables have turned. In a Saturday evening game, the Miners traveled four hours down to Santa Cruz and took on Harbor High School. The Pirates have had struggles of their own to say the least, but this was Nevada Union's night.

The Miners took the opening kickoff 100 yards for a touchdown. That would be the game-winning play. Twelve minutes of playing time later, it was 34-0, and at halftime it was 54-zip. Harbor's only decent drive of the game came early after the intermission. A series of short passes to the left got the Pirates to the three yard line, but penalties and the N-U defense stalled the drive. Even with a running clock and the second string, Nevada Union still scored three touchdowns in the second half. They also went to a knee on the final possession.

So why drive all the way to Santa Cruz for an easy win? First of all, Nevada Union had to figure they would win the game, but not by that much. Harbor was 0-10 last season, but did win their first game this year. That win snapped a 19-game losing streak, and came against a school that had lost 20 in a row. Also, Nevada Union was invited. It's not like N-U's coach thought, “Hey, who could I find to crush within a four hour radius?”

It's doubtful that the Miners will return to Harbor High next year, but for the players and fans from Grass Valley who made the drive, the weekend provided fond memories. The campus, built in a hill with the stadium at the bottom, even looks similar to Nevada Union. The hosts were as gracious as they could be, given the circumstances, and the players even got a look at the boardwalk and the ocean before kickoff.

Eleven touchdowns by nine players, and a shutout. And somehow, the game never got ugly. Without rubbing it in, Miner fans now know what being on the right side of a big win feels like. Even if it was against a little school, and if only for just one week.

Happy Birthday to my dad, who would have been 88 years old tomorrow (Tuesday). Unfortunately, he barely made 50. He's been gone a long time, but I still miss him.