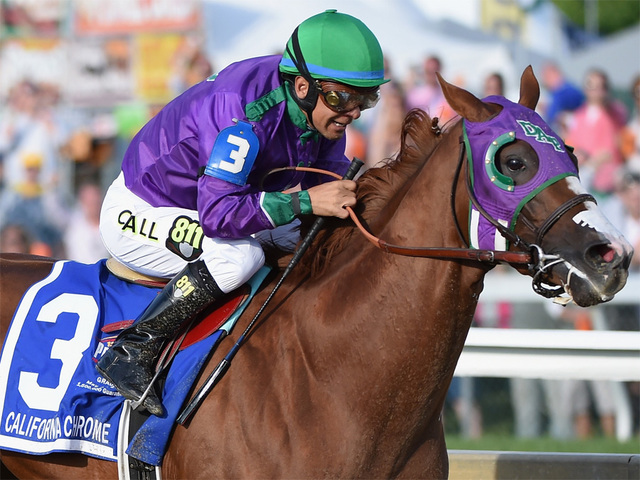 
A couple of California Chrome's owners are from Yuba City. Not the guy who was upset after Saturday's Belmont Stakes and called Tonalist's victory “a cowards way out.” The Yuba City owners are Perry Martin and his wife Denise. Perry doesn't say much, and isn't the one who does the interviews. Still, with the Martins going for horse racing's holy grail, the town, and the area embraced them.

Plumas Street in downtown was closed Saturday. Instead of automobile traffic trying to cut through from one east-west highway to the other, perhaps with a stop at the post office or a local eatery on the way, thousands of people turned out. Big screen TVs with loud PA systems were set up at each end, and on the side streets, more TVs under tents with food and drink. It was a party, and all so that people could say they were part of two minutes of sports history, and local lore.

By now, you know the outcome. California Chrome, who won the Kentucky Derby and Preakness Stakes, and who was trying to become the first horse in 36 years to win all three races, finished fifth. Actually, a review determined the three year-old was tied for fourth. The locals were obviously disappointed, but spending time outdoors in near triple-digit heat to see the race didn't seem like a waste of time.

“It's disappointing”, said Bonnie Curtis of Yuba City. “He looked good when he was coming up hard on the outside. It looked like he might have a chance.”

Jeff Eschrich drove up from Rocklin to be part of the festivities. “All these horses are champions”, he said. “And candidly, California Chrome got so close to writing history, that it's ok. It's a moment. It's exciting. It's incredible.”

They say Saturday's race at Belmont Park was the most heavily-bet Triple Crown contender ever, but it was an 11-to-1 shot that didn't race in either the Derby or the Preakness that came in first. No history was made in New York City, or on Plumas Street in Yuba City, but California Chrome's adventure, even in northern California, was quite a ride.


Get out the cup: There apparently is a triple crown trophy that is kept locked up, and was present at Belmont Park Saturday. It went unopened, but another trophy will be in a well-attended New York City establishment Wednesday night. The Los Angeles Kings defeated the New York Rangers 3-0 tonight to take a 3-0 series lead in hockey's Stanley Cup Finals. The Stanley Cup, the oldest team sports trophy in North America, will be at Madison Square Garden for Game Four.

Gold Sox are perfect so far: The 2014 Marysville Gold Sox season is already a quarter of the way through, and the team hasn't lost a game. They are 12-0 and back in action Thursday night. A weekend sweep would mean a 16-0 record and their best start ever. They won their first 15 games in 2012, after winning their final 20 the season before.