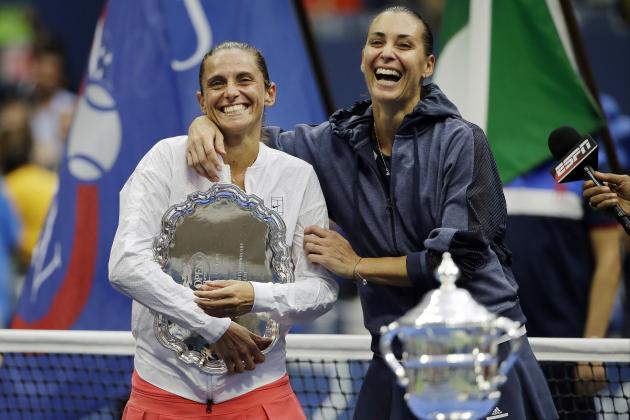 
The NFL opened it's season this week. That's right, the league that has brought you deflated footballs, courts overturning commissioner's decisions, wife beaters, drunk drivers, child abusers, and even a performance enhancing drug suspension of a likely future Hall-of-Famer (and that's just in the last year), is now underway with the on-field portion of its schedule. No thank you.

Football is America's game. It's rough and tumble, mano a mano, conquer or be conquered. That is, until someone touches the quarterback or tries to prevent a catch over the middle. If you want a true test of a champion, and what sports should be about, how about turning your attention away from the gridiron and onto the tennis court?

Flavia Panetta is 33 years old. Roberta Vinci is 32. They have known each other since they were nine. They grew up in neighboring towns in southern Italy and either played together or against each other almost all of their lives. Neither had won a major tennis championship.

This year at the US Open, both of their lives changed. Vinci stunned the tennis world by defeating the sports top player Serena Williams, who was trying to become the first person in 27 years to win all four major tournaments in one year. Due to injuries to other players, and a quarterfinal win over her sister Venus, there was no one left to keep Williams from accomplishing the feat. Vinci was considered a 300 to 1 shot in the field, and lost the first set 2-6, but came back and won the next two 6-4, 6-4.

Vinci, who called the win over Serena “the best moment of my life”, then faced Panetta in the finals and lost 7-6, 6-2. When the match ended, instead of the usual handshake at center court, the two embraced for several seconds. In her victory speech at the trophy presentation, the 33 year-old Panetta, the oldest first time champion, announced her retirement.

Events like this are why we should watch sports. And while football has more than its share of thugs, idiots, and disappointments, you don't always see class on the tennis court either. Everyone laughs about the long-ago antics of John McEnroe now, and no one talks anymore about Serena Williams and how she threatened a linesperson in the 2009 final against Kim Clijsters. Williams also reportedly blew off the media after her loss to Vinci, which isn't a crime, but shows what kind of person she is. Still, a four-set battle between two legends like Novak Djokovic and Roger Federer, or a clash between two life-long friends from another country for a first (and in this case final) chance at glory, is much better than anything the New England Patriots or the Seattle Seahawks could offer. The NFL season is just starting, but it's fourth and 25. Time to punt.


Boycotting Week 1: As you could probably tell from reading the above, I didn't watch any football this weekend, and didn't miss it either. I did get my hair cut Sunday and they had the Seahawks-Rams game on in there. St. Louis was leading, and in just the few minutes I saw, the Seahawks kicked a tying field goal, and then after the kickoff, recovered a fumble and scored. I was happy to learn the Rams came back and won in overtime.

More NFL thuggery: In looking some things up for this column, I discovered a website called cheatsheet.som. According to it, 23 NFL players have been arrested since the 2015 Super Bowl, including Ray McDonald twice for domestic violence and child endangerment, and then violating a court order. There have been no arrests since August 6, when Aldon Smith of the 49ers was arrested on suspicion of hit and run, DUI, and vandalism. The league was so disgusted by his behavior, he signed with the Oakland Raiders this week.

Uneasy Street: If the Los Angeles Angels had any hopes of making the playoffs this season, they probably went out the window on Sunday. Leading the Houston Astros 3-0 with two outs in the ninth inning, closer Houston Street gives up a home run, a triple, and then two straight singles. With the lead now 3-2 after Street has faced six hitters, manager Mike Scioscia leaves Street in to face pinch-hitter Jed Lowrie, who belted a three-run homer. A win would have meant being one game out of the wildcard and 2˝ behind Houston. The Angels lost 5-3, fell to 4˝ behind the Astros, and lost again to tonight.

Spotlight doused: Former Gold Sox pitcher Cody Anderson was going to pitch on national television Saturday, but the Cleveland Indians-Detroit Tigers game to be shown on Fox Sports One was rained out. Anderson defeated Justin Verlander and the Tigers Sunday afternoon, but no national audience.