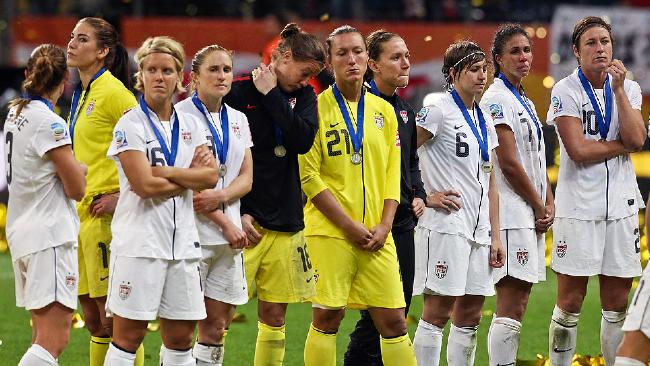 
I hadn't watched any of the matches, but certainly I was aware of the buzz that the United States women's soccer team was generating during the World Cup. So after seeing highlights over and over again of Abby Wambach's header to beat Brazil, I watched the championship game Sunday.

During a 0-0 first half, I found out how ignorant I am about the sport. I thought the USA owned women's soccer. I know the men are behind the rest of the world, but I truly believed the United States was by far the world leader on the women's side.

The truth is, the United States was the final team to qualify for the 16-team field in 2011. I figured they would have been one of those automatic qualifiers. Remember Brandy Chastain after a championship-winning penalty kick lifting her jersey over her head? That was 1999. I thought that the first Women's World Cup. It was the third.

The United States did win the inaugural Cup in 1991, beating Norway 2-1. The Cup was held in the USA for the first time in 1999, and that was Team USA's only other title. It's hard to believe that there have now been six World Cup tournaments, and the U.S. has only won it twice (Germany has won it twice, Norway and now Japan once each).

I actually get interested in the men's World Cup every four years. It's the only time I ever care about soccer. There's too much going on during the Olympics to really pay attention, but during the World Cup, I root for the partying Brazilians, learn a lot about how the Americans are catching up to the rest of the world, and how good countries like Argentina, Italy, and Germany are. (besides, you can watch the game in Spanish, and hear the announcers yell “Goooooooool!”).

The second half of the women's game was exciting. I thought for sure Alex Morgan was going to be America's next great superstar after her goal to put the USA up 1-0 in the 68th minute. Then after Japan tied it, and Abby Wambach scored in Extra Time, you had to figure the chants of U-S-A would still be going on right now after a title. But Japan tied it again, and won on penalty kicks, even after U.S. goalkeeper Hope Solo said in an interview this week that defending PKs is her favorite part of the game.

Now, 24 hours after America's defeat, it is being written and talked about that people are being afraid to say the women choked, and are giving them the proverbial “Nice try.” To me, it's both. As I learned while watching the game, the United States doesn't own women's soccer, and for the next four years, that title belongs to Japan.


All-Star stuff: I won't say this year's Major League Baseball All-Star game was boring, but I don't think it's going to go down in history as memorable. I root for the NL and I'm glad they won. Kudos to Prince Fielder and his home run...this year's Home Run Derby was very entertaining as home run derbies go. I was a little tired during the semifinals, tho, I mean how many Chris Berman back-back-backs is one supposed to endure? But the Yankees' Robinson Cano with his father pitching to him made the show one of the best...Should I be very concerned about Fox announcer Joe Buck and his voice? He seriously has had problems with it since the baseball season began in April, and maybe even before that...Oh yeah, watched the ESPYs Wednesday. Decent show but I wish they'd move it back to the winter.